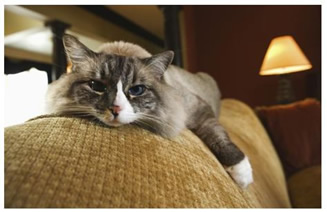 Some people enjoy a newspaper with their weekend coffee. At one Ontario cafe, they get a cat,

Small Things bills itself as Canada's first "cat cafe," a kind of supervised pet-rental experience that in recent years has taken Japan by storm. But unlike overseas, where patrons pay for the privilege of kitty cuddles, the Sudbury, Ont., store offers feline interaction for free in hopes of promoting adoption.

The cafe is part of an emerging trend toward tactile marketing, designed to tap touch-starved consumers whose most frequent physical connections are with their gadgets.

"Canada, overall, is a low-touch culture," says Patti Wood, a noted body-language consultant. "I call smartphones portable three-year-olds because people are attending to them and holding them at the cost of all other interactions."

In fact, even before the dawn of the iPhone — not least today's tablet frenzy — a 2005 Leger Marketing survey found the average Canadian was already spending five times longer per day on electronic communication than on touching other people. Given this "touch deficit," Wood says it was inevitable the pendulum would start swinging the other way.

"Clients are now asking me to train them on safe, non-threatening forms of touch that they can teach their staff — and this is after a 20-year period in which employees were told not to touch anyone," says Wood who consults for a number of Fortune 500 companies.

Museums that have long been "hands-off," for example, have started re-introducing touch by way of interactive exhibits and handling sessions — a trend that caught the eye of Concordia University, where researchers recently launched a multi-year study of the transition.

And in Japan, cat cafes have proven so popular with lonesome city-dwellers that the island nation now boasts more than 100 of the faddish establishments.

Joann Peck, a noted expert on the role of touch in consumer decisions, says stroking animals has been shown to lower cholesterol, calm people down, reduce blood pressure and foster a sense of connectedness. But she cautions that the benefits of touch don't necessarily apply universally in business.

For example, although a touch on the shoulder has been widely shown to increase server tips and multiply the chance of a sale, her latest study finds it can backfire when consumers are uncomfortable with physical contact. They may purchase quickly to escape the situation, but she says they won't return.

"Touch is an amazingly powerful differentiator (in retail) and I think it's going to be used a lot more in the future," says Peck, an associate professor of marketing at the Wisconsin School of Business. "But what we're saying is that it's not for everybody."

A year into the cat cafe business, co-ordinator Jan Carrie Steven says they have yet to receive any negative feedback. She describes visitors as consistently getting "that 'awww' response" when treated to juice, coffee, cookies, tarts and the company of some rather emotionally promiscuous felines.
"We have floozy cats that will warm up to anybody who comes in," says Steven, laughing.

Per health requirements, food and drinks are made off-site, and patrons serve themselves. The cats are all fixed and vaccinated, and sell for $15 to $75 to those interested in making their playtime permanent.

"The most cats we ever have in the store is 12 because we don't want people to feel overwhelmed," says Steven. "We don't want it to smell, either."